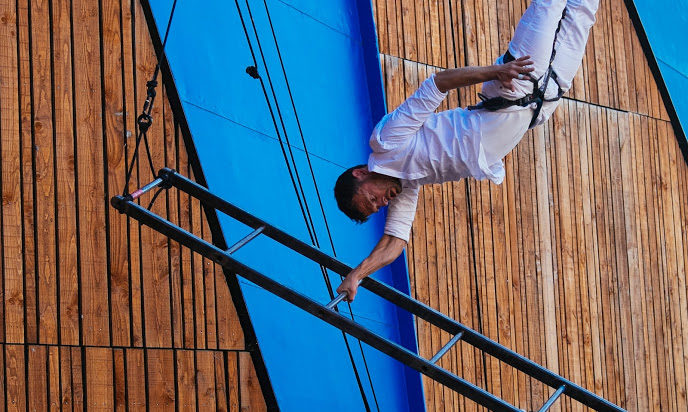 His practice of high-level climbing since 1980 has opened him to the infinite diversity of movements born from the adaptation to the rock. To climb a route is to find placements, rhythms, the inner state…

This practice of natural spaces was foundational for his choreographic writing which deploys a whole gestural repertoire and a corporality of the useful movement inscribing itself in the public space.

He met Bruno Dizien and Laura de Nercy in 1988 and became a performer with the Roc In Lichen company in Rosaniline created at the CNDC in Angers. He has accompanied Kitsou Dubois and his choreographic explorations in Gravité zéro. He collaborates within Retouramont with several artists; Antoine Le Menestrel with whom he creates the company in 1989, then with Ingrid Temin and Geneviève Mazin. He develops with the latter, the concept of “Réflexion de Façade” creation in situ for a site from 1993 to 2009.

He shared the artistic direction of the company with Denis Welkenhuyzen from 2010 to 2018.

He supervises with Olivier Penel, technical director of the company, a cycle of professional training course 2019/2023 in collaboration with the FAIAR and the CNAC of Chalons-en Champagne.

2017/2020 he creates with the company Retouramont a European network gathering 7 nationalities, the Vertical Dance Forum network.

2018 to 2023 he accompanies choreographers from other repertoires who wish to integrate vertical dance into their creations: Mourad Merzouki in Vertikal, Bruno Bouché in Les Ailes du Désir, Project 3N Korean company with their project of vertical tea ceremony.